Revenge of the Swine

also called How swine flu started as narrated by Jdid the pork prophet and seer to the swine. 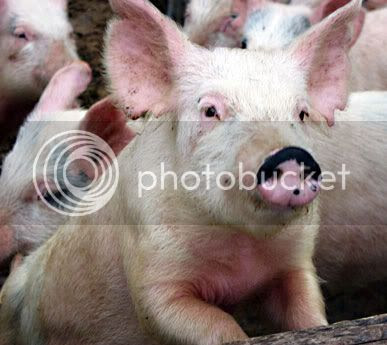 And so it is written in the second book of Pork-etry chapter 9 beginning at verse 3.

Chapter 9.
3. For blessed are the ham makers, and those that bring home the bacon.
4. And let all those who have snouts rejoice for verily the day will come when those who have risen up against them will be rewarded justly or unjustly an eye for each eye plucked and a rib for each delicious barbecue rib not devoured.
5. but beware of pigs who sniffle and are congested
6. For it is written that they have rebuked thee and chastised thee out of jealousy because of the sweetness of thine meat for it is known that thou art the chosen of the lord and have been made the sweetest of all meats on earth but from hence the swine flu will be a great leveller and will bring them back to the fold.
7. For it shall seek out those who have continually borne false witness against thee and have downpressed and forced thee to wallow in unclean swill these many years. Naa they shall finally see the light and they shall be judged for their sins against thee.
8. Neither the tender lambs of the fields, the bovine of the stables or birds of the sky ie geese, chicken etc shall inherit the earth with thee but they shall perish on the plates of the McDonalds and KFC, their endings a tasteless testament to your greatness.

and continuing in Chapter 11

7. And behold it came to pass in the year of our Lord 2009, there arose a great uproar from the multitude of swine.
8. And they were filled with anger and much wrath.
9. For they had been castigated and pilloried for many a day, indeed many a season, indeed almost from the beginning of time.
10. So swine kind of all ilks: pot bellied, big bellied, pink, off-pink, good for nothing and industrious, everybody but guinea pigs who aren't actually swine by the way, all journeyed south (to old Mexico) to chew the fat ...so to speak.
11. And there arose from the multitude, a speaker, one called Napoleon, a rasta pig, from an Orwellian animal farm to address the assemblage of the swine bredren.
12. He who was known for his oratory skills and had coined the phrase "all animals are created equal but pigs a run things rude bwoy!"
13. And verily when the assemblage had been quieted behold he spoke
14. My distinguished pig bredren, alas we have been castigated and ridiculed for many a day, indeed many a century and as far back now as our collective memories can now remember.
15. And we have taken it all in stride because we have always believed that sticks and stones may hurt our bones but words would never harm us although to be quite honest we have all known the sting of having slovenly humans, gluttons and police officers being accosted by what is seen as an insult and referred to as pigs.
16. and untidy locations being referred to a a sty.
17. This must all cease.
18. And we believed that the truth would eventually be made known once and for all.
19. And that the vicious rumours and innuendo which we believe to have been started many centuries hence, by some dirty jealous ol cow of course, would cease forever and swine kind would once more rejoice and frolic joyously with mankind and animal kind in a show of unity
20. playing in special mud like the type that the rich people put on their faces at spas and such.

Chapter 12 -
1. For was it not written in the second chapter of the first book of Pork-etry that verily scales shall be lifted from their eyes and they shall be like a people seeing for the first time and they shall realize that pork is too, too, too sweet.
2. For were not the swine saved also by Noah in his ark at the bequest of the Lord? And if then swine be so unclean why did God choose at that moment to not smite us or choose not to have us drown or become extinct like the dinosaurs or the dodos? (Gotcha!)
3. But alas for many a day our feelings and that of our ancestors have been hurt as first the Muslims and the Jews, then later the Adventists amongst the Christian folks, even in the face of the New Testament saying call nothing neither common nor unclean,
4. have subjected us to immense ridicule making us outcasts and lepers even amongst our farm animal brothers and rejected our presence on their tables preferring the bacon from the ignoble turkey and calling us unclean,
5. because we chewed not our cud, even though it is well known that chewing cud is a sign of stupidity and it is also known that we have sweeter meat than the bovines.
6. And in later days when religion started to hold less sway in the world and the world became more secular, and the cows were stricken by the deadly Jacob Crutzfeldt, there was hope that our ribs, succulent bacon and pigtails would find a new niche and finally be recognized for the value that they hold.
7. But there arose ones called nutritionists and health food fanatics and other heretics to continue with the crusade against our flesh saying pork is unhealthy and our meat was not readily digestible and other such obscene lies which made the people afraid and turned the people even further against us.
8. But alas enough is enough for vengeance is thine saith the lord and is he not lord of all swine-don (as opposed to all Swindon which I think is a spot in the UK).
9. So verily it came to me hence in a vision. The time for revenge is nigh on hand.
10. Let them again blame us for this swine flu but let all shudder in fear
11. for Jah say lik dem wid diseases!
12. And there arose a great noise like the terror of an intense thunderstorm as the assembled hosts oinked loudly in support and the council of swine-don murmured in appreciation of the oration of Napoleon and approved of his idea to use the swine flu as a weapon against the anti-swine-ites and the haters of ham.
13. And so it came to pass.

Here ends this evenings lesson.
Posted by Jdid at 12:11 a.m.

i have just peed myself... i'm so e-mailing this post to everyone i know...

now get back to work jdid!!! enough of this tomfoolery!!!

I volunteer my services and appeal to others to give of their time also. Pork lovers we have much work to do if we are to launch the much need public relations campaign to repair the sullied image of the other white meat

LMAO! Man you had me laughing out in my office like a crazed man! Now all my coworkers must e convinced I'm mad!

we had ribs last night on the BBQ in tribute to the madness connected to the meat.

LOL!! De work people are going ta toss me out for giggling crazily at my desk.

Jdid. YOU are the BOSS!! this thing sell off... Jdid you make it. I shall forward this to all and sundry post-haste forthwith... lmao!

Oh wow. Boy you are one of the original pork mouts! Not to mntion half a poppit! lol! Watch yuh back in case the ital community don't tek kindly to your rasta pig :)

Ya want to know how I know that pigs is very bad?

Fantastic! Did you ever hear of Leminotep he used to hold Sunday Gleaner readers wrapt with similar style of commentary here in Jamaica. Right on man!