Yesterday was election day in Barbados and the incumbent BLP government got turfed, (ps somebody try and edit that BLP wikipedia entry) the boot, throw way, kicked out of power. So long, siyonara, arevaderchi, au revoir, it was nice while it lasted.

In Barbados, we usually don't have close elections and this one followed form with the former opposition DLP giving the incumbents a 20-10 lashing! A so it a go sometimes I guess. Good for the Dems (DLP) considering about 8 years ago they only had 2 seats in the Parliament, tonnes of infighting and word was they might be on their way to becoming irrelevant to the masses. 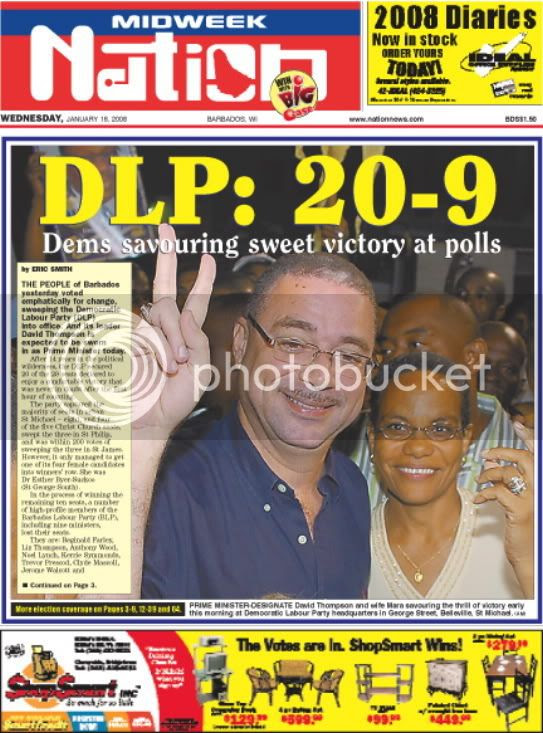 Congrats to new PM David Thompson (somebody do a wikepedia entry fa the man nuh) and his party and umm I meant that term poli-trick-sions in the nicest possible way sir.

But me still cant believe we elected a PM who went to Caw'mere. Soon all a we will be singing under an um-ba-rella ella ella eh eh eh. Lawd ave mercy!

Ya know what I like about Bajan elections though? Nuh big lot of drawn out preamble like in the US. Election call just before Christmas, a few weeks later election done. Compare that to the US with all sort of primaries, secondaries and tertiaries , two years of campaigning and nuff long drawn out speech-ifying where after the first debate the candidate really doesn't say anything new at all. No wonder the electorate duz get tired and fall sleep and become despondent and don't carish and eventually don't vote. Plus all this long lotta campaigning mek it so is only millionaire can compete for the Presidency and the House and Senate cause you need nuff, nuff, nuff money to carry staff and have election supplies for that long a campaign. Ya cant run no lil corn beef n biscuits campaign or as my friends in Jamaica would say Curry Goat campaign for that long at least not given the high price of eclipse biscuits or goat these days. I lie?

Contrast the US with their millionaire candidates with Barbados where we have certain politicians (both who I think won) who don't even own a car let alone have millionaire status. That is democracy star! Respect that!

Anyway regarding the Barbados elections now its all over all the experts and pundits and know-it-alls will come out the woodwork and pontificate on the results saying they predicted this outcome and trying to make it seem like they really have a clue. Hindsight really is 20-20 isn't it?

Last night listening to CBC Barbados from the time results start coming in I hear all sort of man chat about how they predict the undeclared people from the surveys done prior to the polls
would vote Dems (DLP) and how they knew winds of change were blowing since most of the region who have held elections in the past year, TnT being the exception, have voted out the incumbents and yada yada yada. Yea fa true? Well all ya wasn't saying that prior to the election so hush up!

Anyways well that is just the start as the talking heads will continue ad nauseum for days and months to dissect this election result looking for trends and nuance and extrapolations and answers to the whys and what not of the outcome. Cant hate on the analysis. But being a budding pundit myself I feel that all the so-called experts overlooking the real reason former PM Owen Arthur lose. Its so simple and yet they can't see it.

I wont waste time with more preamble but get to the point. Look for all the talk about insular Bajans who don't like people from the rest of the region and feel they better than them Bajans like their leaders to have non-Bajan wives. That is the truth people!

To prove my point consider the history of the former Bajan Prime Ministers why don't we. (this theory is limited to post-1966 independence analysis by the way).

The father of Independence; the Skipper Errol Barrow was married to an American. Following him Tom's wife wasn't Bajan either (at least as far as I know), Sandiford's wife is from yard, Owen's former wife was from yard, new PM David Thompson's wife is from St Lucia. You see the trend? Coincidence ?? I say not!

And some of you that know Barbados will say but Jdid what about Bree St John who was prime minister for a year from '85 to '86 after Tom Adams died? His wife was Bajan wasn't she? That don't fit your hypothesis.

Very perceptive I'd say in response. The answer to that is yes she was/is Bajan and if you don't examine carefully that would seem to spoil my hypothesis but in fact if you do really know the history this case really proves my theory about Bajans not wanting Bajan first ladies.

Examining Bree's tenure lets make it clear that Bree never won an election, never ever got a clear mandate from the people, only Bajan PM you can say that about, and in fact presided over the worse defeat by a ruling party in Barbados history when his Bees (BLP) were routed 24-3 by the Skipper's Dems back in 1986. Coincidence that he had a Bajan wife and loss so bad at the polls? I think not! See my point? Alright then.

And is it coincidence that Owen Arthur won three elections when he was married to a Jamaican but now that he divorced recently and married a Najan lady he lost so badly? Hmmm. Wunnah can decide for wunnah selves but I think the facts are clear. Owen loss this election from the time he divorce the Jamaican lady and marry a Bajan. I feel he should have gone Guyanese but that is juss me.

See for all the talk about insular Bajans we doing our part for regional integration. No Bajan first ladies allowed. The record speaks for it self and the proof is in the pudding people.

So see de I, I think if I want to get into the poli-tricks business I must look for a new non-Bajan wife so I can compete on an even footing. :-)

ps: I hope no one takes this post serious cause I know sum a wunnah would start cussing me now but like I always say refer to the title of the blog.
Posted by Jdid at 1:38 p.m.

No one party should be in power too long. It's good to shake it up.

LOL @ getting a non-Bajan woman. My godfather is Bajan and he has a thing against Bajan woman. It's ridiculous.

Jdid,could be the theory them CC peeps have abt bajan women..Anyway, I glad DLP win cos most my Bajan fam were behind them so of course I gotta follow:)

you're right about thing. we do get political fatigue here in the states. i swear they've been running for president for two years!

I'm glad the Bajans decided to "change course." I guess countries like America go through all that long campaigning because they have the resources. Plus the winner gets to pretty much rule the world. We smaller nations can't afford that. And that thing about Bajan women is just ridiculous. They're just fine if you ask me.

Yuh know how we got a saying "every fool got he own sense", well my man you mekking bare sense hey, until somebody come and disprove you theory I going wid you...when you decide to throw you had in de ling lemme know, I gine help de good Bajan wife dat yuh got now throw big rocks at yuh head.

it is de cold weather that got he postulating pun de men bedroom business doah. lord have mercy... if yuh got a bajan wife yuh can't be PM!!?? if he din my friend I would lambase he tail wid cuss. But he lucky cause I dun wid cussing and de lil truth in dat spurious arg'ment got me rolling heyso. Anyhow I surprise dat my bajan sistren lehe get way so. I know dat a few ah wunnuh ain give up nuh cursing an ain above aiming straight fuh he jugla:-)

JDID,What's up with Bajan women?I have met some real nice, beautiful, and highly educated Bajan women in my time, that I would consider great spouses for any Bajan Prime Minister.Again, I am a J'can, so I may not be familiar with the nuances and subtleities of this issue,if it is really an issue.RESPECT!!

Looks like a lot of political changes in the Caribbean. Jamaica, now Barbados, let's see who is next.