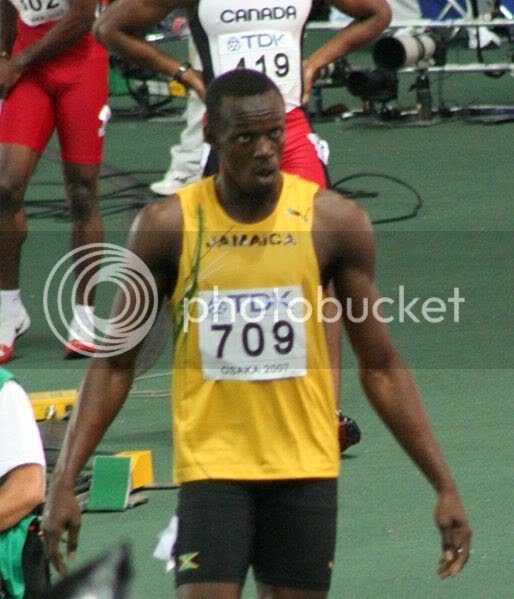 How aptly named is this guy? Bolt wow! 9.69 and he was celebrating at the 80m mark. Congrats! Big up Jamaica!

Asafa choked! Maybe with Tyson Gay not making the finals he wasnt motivated. I'm mad though cause he got beat into third place by a T-pain lookalike. That not right!

Last night on CBC (Canada) they had this discussion about why Jamaica has produced such amazing sprinters over the years. I didnt exactly catch the name of it but they claimed there is some special protein that Jamaicans have more of than men from other countries. Yea what da? its a cop out but whatever.

Anyway whatever this protein was they said that 70% of Jamaicans have it compared to 30% of Australians or something like that.

I dont know bout y'all but it sounded like somebody had been watching Star Wars and the Jamaicans suddenly had mediclorians in their blood that made them Jedis. lol
Posted by Jdid at 11:04 a.m.

Bwoy, Jamaica couldn't ask for more. We over here throwing down like is carnival time, lol! Ecstatic, happy, and under tropical storm warning... Bolt struck first and nature get jealous! LOL!

I hadta do a post bout this same thing just now...

A very fitting name indeed! What a race star! You are right he basically started celebrating from the 80m mark and even seemed to have slowed down when he realized he was leading so much!

It was indeed fantastic to watch.

Re the Canadaian's assessment: Stupid. I had received an email spoof the other day about the 'secret way' that Jamaicans were doping: yellow yam. LOL!!!

But, I wanted a Caribbean trinity. With 6 reps in the field from the Caribbean, I would have loved for us to sweep! Sigh. Oh, well...can't win them all.

I am feeling the pride right now, proud Jamaica,very please with the results. I wish Asafa did better though 5th?.

Relax, confidence, focus and a little showboating does it. I hope Bolt makes plenty money from appearance fees in tracks over the next couple years and in London 2012 another gold he will be 26 then.

Jamaica should adopt some of the characters of our athletes and apply them to other areas of national development.

Our ladies won all the medals in the women's 100m

I usually don't get into the Olympics, but this time around has been amazing.

didn't his father say it was "de yam!" that had him so fast? LMAO

actually, it is nothing more than physiology. blacks are built for speed. typically, we have bigger quad and gluteus muscles (power off the start, propulsion) and bones that are less dense (lighter, aerodynamic).

having dated a runner, i learnt a thing or two about how race indeed plays a part in sport. we are built for speed... (whether we like it or not).